Some things that happened in london

Thanks, no doubt, to the wicked machinations of Europe's evil winter queen and her ploy to ruin Christmas, Til's flight to London from Australia was delayed so that she arrived on Christmas Day. As a result, our London stay was significantly shortened, and I'm going to have to wring and squeeze it just to evince a few measly drops for your ravenous, quavering mouths. Here they are in dot-points form, as is befitting of their moietic length and significance: 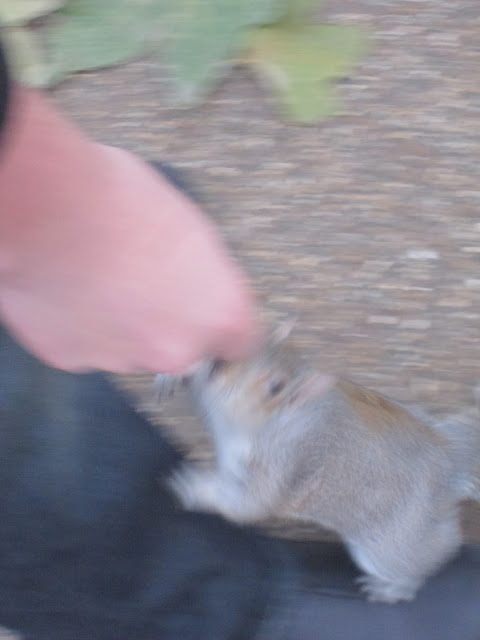 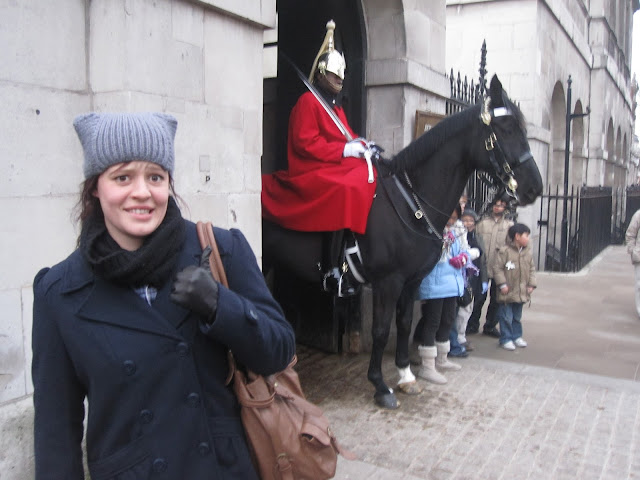 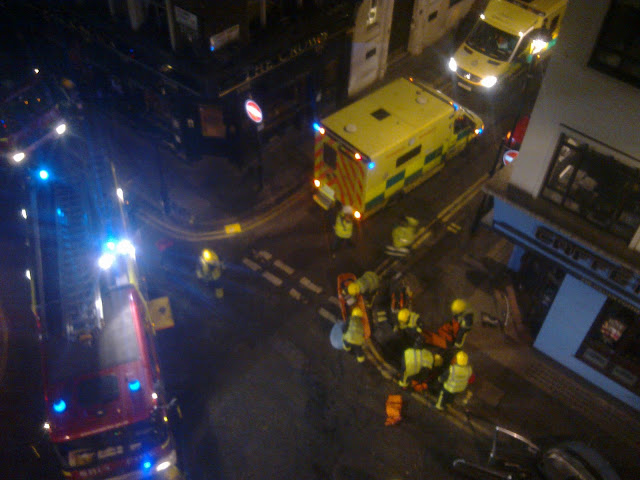 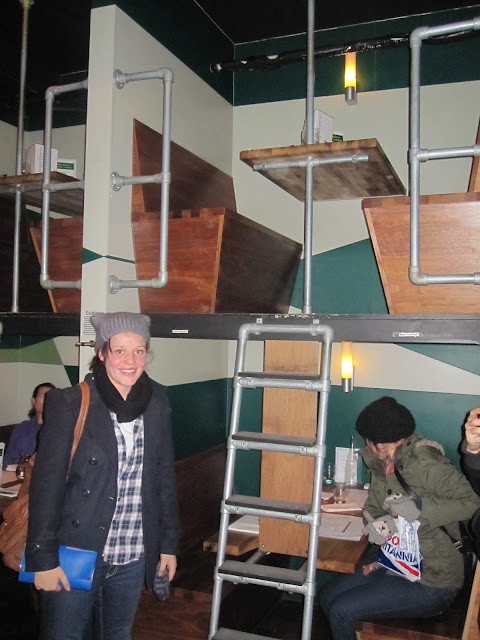 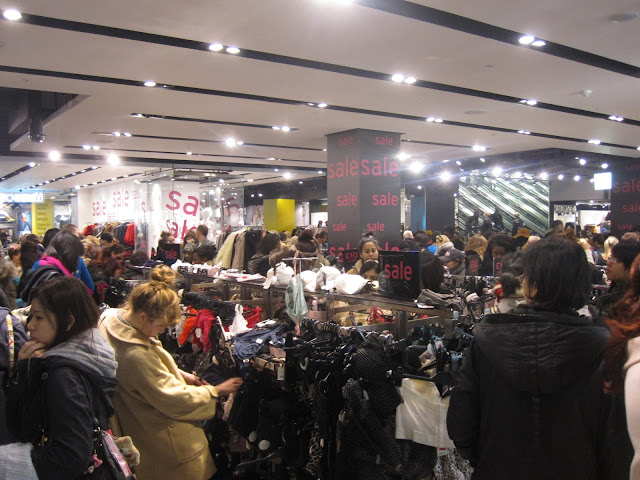 Impressions of the emerald isle

The ubiquitous and omniscient Lonely Planet has seen fit, in a series of annual lists which has also featured Australia's Newcastle, to name Cork, Ireland, one of the top ten cities to visit in the world. That's a pretty big call, and I'm not sure how I feel about it, having just spent about nine days there. It's probably a case of expectations being different to reality, mostly.
Australia is usually a pretty humble country, if not in its anthems and policies and slogans, then at least in the attitudes of its individual people. And I think we're inculcated somehow with this idea that we're the ass-end of the world, that Australia's a good place to live, but that's it's culturally, architecturally, technologically, culinarily deficient and isolated and that, by contrast, all the countries in western Europe, including Ireland, are 'better' than us in those areas. The thing is that Ireland isn't, really.
Before Ireland I was in England, and I mistakenly believed that Ireland was going to be very similar - a tiny but densely populated country. It's not. Its population is only about 4 million, which puts things in perspective. Here I was expecting culture and technology and a golden promised land from Ireland, and you could kind of say that they're backwards compared to us. In fact, some locals do say that. They don't have hot running water like we do - they have to switch on a boost or something which provides a certain amount of it. They have about four public TV stations which are absolute crap, and they have to pay for even those with 'TV licenses' (and they still have ads, as well). In fact, you have to pay for everything in Ireland: TV, garbage collection, public toilets, and outrageously priced public transport. It suggests to me some extreme right wing politics, maybe? Because it's like it's been over-privatised; the anti-welfare state, so to speak. Or it could just be the recession. I tried to talk politics a couple of times, but not very fruitfully.
But by no means was it all doom and gloom. I had a fantastic time, really. All of the above just added to the beautiful and at times hilarious experience. On the plane in I thought the air hostess was speaking Gaelic and was about to translate into English, but it turned out it was just the accent. The weather was also a great novelty for me - so much snow! 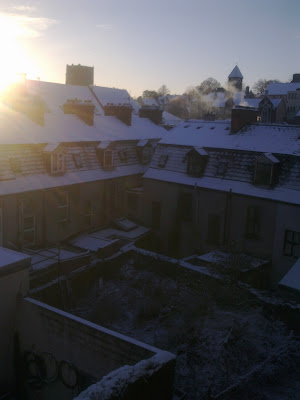 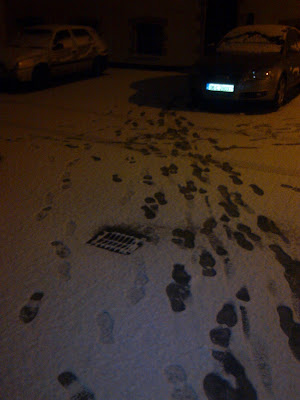 At Charlene's theatre group's Christmas party, I tricked an entire room of Irish into believeing my uncle was a 'poker', meaning his job was to walk across the Sydney Harbour Bridge every morning at 4am using a forty-foot pole to 'poke' the koalas off it into giant nets; then I laughed and thought the jig was up, only to find that they were still captivated by my tale; and so I continued, elaborating that I'd done work experience with him in year ten. I also took part in two of Charlene's friends' tradition of taking 'beating' (pronounced 'bating') photos: 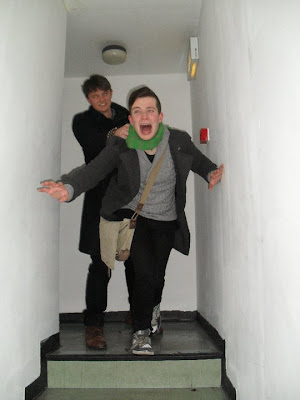 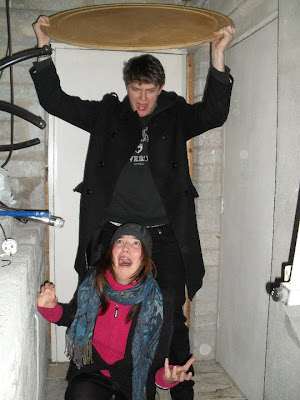 Other high points included teaching all Charlene's friends to play 'Mafia', having someone say 'You're so tanned!'; seeing a spontaneous street performance of A Christmas Carol, and this sign: 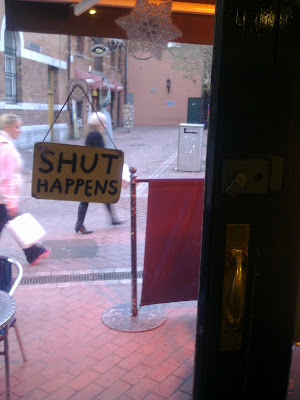 Posted by Luke Bagnall at 9:04 AM 0 comments