A vindication of the rights of sloth

The other day Gilly and I indulged in the oft-maligned practice of the lazy day, and we definitely felt guilty. I don't mean like, relaxing in the sun or whatever when you're in Thailand; I mean wilfully shunning the sights and sounds of the barely explored outside world in order to watch The Breakfast Club and From Dusk Till Dawn on a projector screen in the dark while gormandising pizza, popcorn, wedges, chicken strips, sandwiches, Twixes, and hearty servings of chips, cheese and gravy.
I know, I know: I should’ve been out ogling the London Eye or frolicking in the verdant fields saying things like ‘Oh golly, would you look at that, top drawer!’ But we just didn’t feel like it, okay? No more, this ridiculous sense of guilt. In moderation, there’s nothing wrong with a bit of hedonism. It’s like at Splendour – I enjoyed myself ten times as much once I stopped worrying about going to see every single band just to get my money’s worth. Some of my best memories of that weekend are chilling out in the coconut hut or on the hill next to the pavilion where the John Steel Singers were playing. That kind of thing leaves you well-rested for the things you really want to see, and makes your activity more exciting by contrast. That’s one lesson learned for this trip. I want to see plenty of tourist attractions and monuments, but I’m not dragging myself to them out of a sense of duty, or out of a need to manufacture memories in front of them, that’s for sure.
We tried to make up for our indolence the next day by going to the New Forest and Durdle Door, but traffic prevented that, so we went shopping instead. I got me an English coat!
We were more successful the next day when we went to this amazing open-air museum where they preserve houses and buildings from the twelfth century onwards.
On the way there we giggled over silly English town names, imagining how they could be made more hilarious by common English town name additions like ‘Little’, ‘Great’, and ‘-ton’ = (Little) Didling(ton) and (Great) Cocking (upon Sea).
They also had a duckpond which was frozen over, and a merry time was had by all when I chased them onto the surface in order to watch them skid as they landed. Perhaps less fun was had by the ducks, I don’t know. 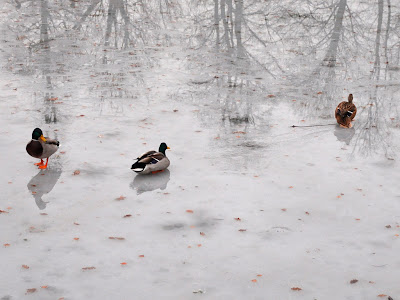 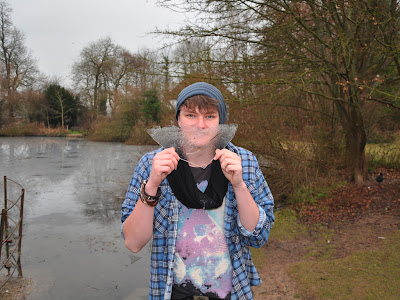 Since then I’ve come and gone from Ireland (see following post for details on that), but there too I have fallen victim to the will of sloth. One day, overcome by the dankness of European winter (I think it was actually the shortest day of the year), Charlene and I could do nothing but lounge on the mattress in the dark, affecting world-weary French accents, practically dripping ennui: 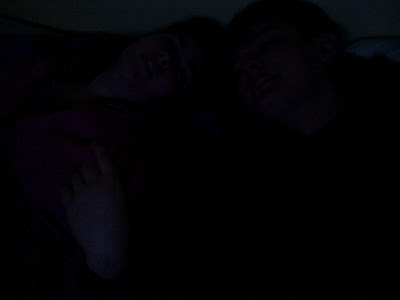 ‘Ah, I ’ate zis vucking countree. She is a filthy, vile wretch ... But I cannot ’elp but love her also. She is like a putrefying whore lying seductively in the gutter of Europe, and while I am disgusted, I cannot stop myself from suckling at ’er withered teat.’
And so on.
Posted by Luke Bagnall at 1:37 PM 0 comments

Mr bagnall, darling of the universe

It only took thirty seconds in England before I never wanted to leave (but don't worry, Nan, I promise I will). Of course, my ebullience probably had something to do with the fact that I'd just been cosseted for twenty hours on my two (count them, two) business class flights instead of being slowly withered into a jetlagged wretch by cattle class. 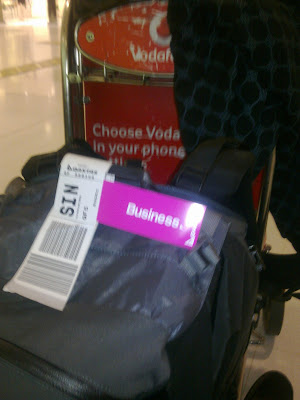 I had no idea what to say the first time the stewardess asked me if I wanted anything, Mr Bagnall. But I soon got the hang of it. Beer, wine, juice, coffee, hot chocolate, nuts, Lindt chocolate, cheese and crackers, three-course meals, croissants, toast, bacon, eggs. Yes. Just, yes.
And it seems that this blog was aptly named after all, because ordinary things being viewed in a different light has characterised all my experiences so far. For example: 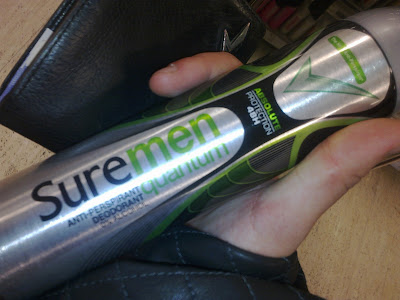 Rexona = Suremen?
And even on the planes. Being addressed as 'Mr Bagnall', of course, but then there's the strangeness of turbulence. It's such a familiar, comforting sensation, almost exactly the same as a car trembling over the road late at night when you're a kid and your parents are driving and you get to relax and go to sleep. But then you realise that you're about seven hundred thousand kilometres in the air and it becomes a little more disturbing. Same thing with lightning - I love when it storms and you're all warm indoors, but seeing the flashes outside your window when you're actually in the sky is a bit different.
Anyway, I got there, zipped through customs and all that without any trouble, and got picked up by Gilly at six in the morning - it felt like six at night. Everyone always talks about how early it gets dark in Europe in winter, but you don't hear so much about how late it gets light. It was still dark at eight. I've been into Winchester's main street most days since I arrived and seen cafes, the university, the markets, and the cathedral. 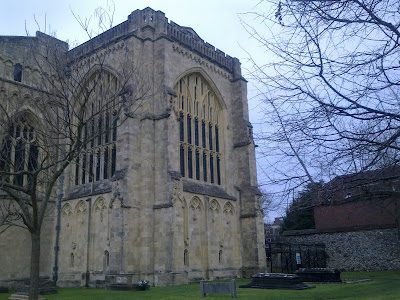 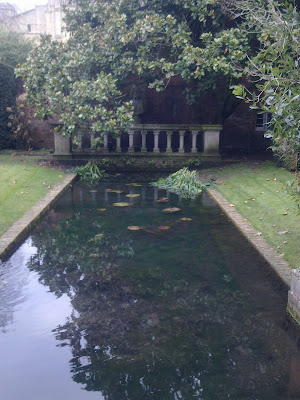 Everything here is amazing. It's all so cool and old. Wollongong has about three cool cafes; here every second cafe is an old converted townhouse with four levels and a blackened spiral staircase spining through it. And English pubs are so cool. Much cooler than the ale, which is as warm as I've always heard. But surprisingly delicious.
It's like I'm so amazed by everything because it's a Western culture - it's so close to ours, but so different. I have to keep reminding myself I'm the one with the accent. I can't believe those accents are completely normal for all those people, that they don't bat an eyelid at the architecture all around them, or the canal, or the statue of King Alfred, or anything. They even play that cardgame we (Alex and Alissa & co.) always play where you have three face-down cards and three on top of those facing up and three in your hand, except they call it 'shithead' and the loser has to wear underwear (or 'pants', as they call them) on their heads and with a few other alterations. I played with Gilly's family at her parents' house because we stayed Saturday night for her mum's birthday and their early Christmas celebrations, which was great. Of course, being the universe's golden child at the moment, I had amazing luck in both games, twos and tens and aces practically throwing themselves at me so that I won the first game and came second or third in the next.
Anyway, I'll try to be more comprehensive and entertaining in my next post. I've been spending all morning updating my travel journal and mandiary (mandy-ar-ee) and responding to Facebook messages, so I grow weary.
Posted by Luke Bagnall at 4:43 AM 1 comments

- The Lion, the Witch and the Wardrobe, chapter 7
Despite the facts that the hours between me and my departure tomorrow evening are diminishing rapidly, and that my things to do list is growing ever smaller (oxymoron?), my multifarious concerns are not, to my chagrin, in commensurate decline. 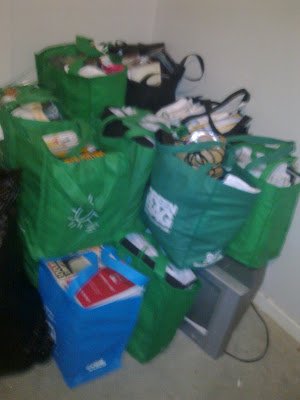 Moving house via envirobags.
Will I get on the flight with Dad's staff travel? Will they let me into the country without having six thousand bucks in my account? Will Tilly let me buy a DSLR when she gets to England? And most importantly, are the British Isles about to fall under the icy reign of some kind of wicked polar princess, some inclement enchantress, determined to hold them forever in her glacial grasp!?
A wise Englishwoman, Gilly, just bespake the below prophecy unto me: 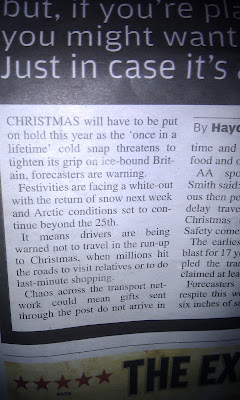 And I'm convinced the events it foretells can only be the result of some dark arctic mistress gathering power on a Narnian scale.

[pics from http://www.movies.yahoo.com and http://www.itsnews2them.blogspot.com]
Whatever it is, it'd better not ruin our Christmas. All we can hope for is a thinly veiled Jesus figure (like a messianic cat) to free us from the would-be snowed-in confines of the Piccadilly Backpackers Hostel!
Posted by Luke Bagnall at 1:33 AM 0 comments

(I promise my next post will be more exciting).

So with two weeks till departure, the first traces of organisation are finally beginning to coalesce. The current visa debacle aside, Til just booked our accommodation in London for Christmas at the Piccadilly Backpackers Hotel. Apparently it's ridiculously central. Accross the road from Trafalgar Square and around the corner from Pall Mall or something. Til and I were saying we can't believe those places actually exist! The hotel itself looks really cool as well. It has art rooms you stay in? Not really sure what they are but it sounds awesome. Pics available here.

I've also received an offer of accommodation at the University of East Anglia (UEA) in one of the (apparently) famous 'Ziggurat-style' student residences on campus:

(Image courtesy of ueaaccommodation.com)
I get my own room with free internet, sharing facilities with like, eleven other students or something, which should be great for meeting people. It works out to be around $125 a week, which is less rent that I'm paying as it is in Australia. Tilly's staying across the park from me in the same style accommodation in Suffolk Terrace. Here's the interior:

(Image courtesy of ueaaccommodation.com)
That's it for now. If anyone knows anything about UK visas, please help us. Dear god, please.
Posted by Luke Bagnall at 7:03 PM 1 comments